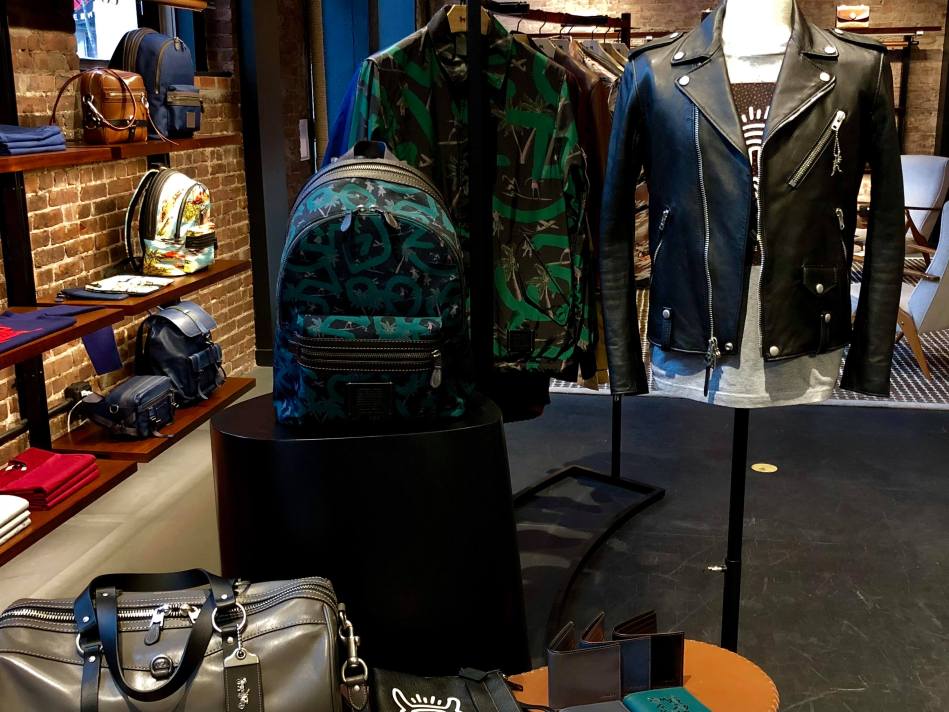 Long story short: I didn’t give a swamp bottom about Gucci Mane or Deisel yesterday. I just wanted coffee and a stiff sandwich. So, after one venti sized cup of confidence a la Starbucks (no sandwiches, not enough dinero on my giftcard), I journeyed over to Coach on Prince Street to check out the new 1941 collection featuring the artwork of AIDS activist, Keith Haring. I was lucky enough to get a preview for RCB! The collection is a lot smaller than the lookbook lead us to believe, but is filled with kitschy, sexy, very organically NYC pieces, as an homage to earlier, skater punk days, sprinkled with a little of Stuart Vevers’ oh-so-famous-British sensibility to the American fashion house. Coach 1941 is like dunking an Oreo into a cup of Earl Gray. It just works.

The suede western jacket is an absolute home run.  The Dylan, or as I refer to it, the bondage bag on the upper left is an almost kinky take on the flight bag, tying together 1960’s flight culture with a little gay leather scene. Unexpected, and yet I’m here for it.

My nephew calls backpacks “pack-packs”, and the pack-pack here has grown on me immensely since the collection debuted the runway. I’m still not sure how I feel about the signature c making a comeback. Coach popularized that during an early 2000s logomania trend, lowering the cost of the products IMMENSELY, lowering the price too. So with current fashion empires revitalizing their signature fabric patterns, there falls that issue. While Gucci and Louis Vuitton are doing it, they never sacrificed quality. They just fell out of vogue, versus competitor Coach, who, at the time was trying to corner the market on middle-class buyers trying to tackle the new trend, that later cocooned into a status piece, that then transformed into an outlet bag. Ah, the riveting history of fabric purses, huh? Makes you just want to keep your money in a Ziploc bag instead.

I just don’t want to see Coach Poppy make a transition back in the brand, honestly.  She needs to rest peacefully where she belongs, in the hell that was 2009, which granted, gave us Barack Obama, but also… the Abercrombie and Fitch days, sending shivers down my spine at the mention of. I can still taste the Fierce cologne to this day.

My favorite piece on the takeaway from today was this Hawaiian Print Jacket at 495.00. It’s a serious throwback to my Old Navy Hawaiian printed shirt days. It’s coming home with me when I have money… which god willing, is coming. I can’t keep ignoring student debt forever. I just can’t–no amount of prayer releases you from that insidious beast.

The Haring Gemini intarsia sweater is inlaid with Lurex, bringing a level of glam to this classic Americana style, but is SO similar to the Rexy sweater I have. Same price point too.

The khakis? They’re a far cry from the runway pair with the enormous zipper that I fell in love with from September’s fashion show. Fun fact: brands seldom produce the full run of the show, which sucks. I don’t want to scour the internet after EVERY SINGLE FASHION SHOW TO GET THE SHOW SAMPLE. I ain’t got time for that! I’m too busy watching dog videos to pay attention to that sort of thing.

I’m keeping a watchful eye on Coach House on 5th Avenue and Prince Street until I find my favorite runway pieces though. I’d recommend getting a pair of pleated khakis from Zara or H&M because these babies pictured above run a steep $195.00. They’re solid in construction, but so are gold bricks, jussayin’.

As far as womenswear is concerned right now, there’s nothing remarkable about the bags. This season’s hero bag, dubbed the mailbox, was nowhere to be seen on the floor. There’s some rocking dresses, but everything is so circumstantial this season in styling. As a whole, the collection is very similar to the Coach Outlet x Keith Haring Collaboration of last year.

Coach 1941 x Keith Haring can be shopped at Coach House and Coach SoHo today, and will be available on March 9th online and in-stores worldwide. I’m expecting we’ll see a larger drop of collection by then–I’ll be sure to keep everyone posted! Comment me your favorites from the drop down below.

0 comments on “Once Upon a Prince Street: Coach Spring 2018 Preview”